As you’ll know from our previous posts Google has been counting down the the 40th anniversary of Sesame Street on it’s home page all week with a different character every day. Today’s ensemble picture (right) is the final doodle in the series as today is the 40th anniversary of the first broadcast of Sesame Street. The series of images were intended to help the Sesame Workshop and support it’s goal of educating children. 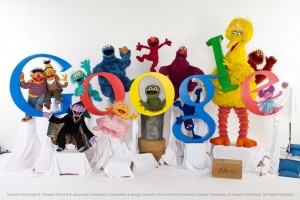 Google has released a high resolution gallery of all the images suitable for use as desktop wallpapers, etc. including a behind the scenes look at how today’s image was created (right).

Personally I think Google can do what they like whith their homepages and helping educate children is a good way to prevent things like the Berlin Wall and global conflicts happening again.

Ask Jeeves have also put in a little dig via their Twitter account: “I hate to be bitchy but is anyone else bored of Google’s Sesame Street logo- I’m all for cookie monster but us Brits are more about Rainbow”. Seems you really can’t please all of the people all of the time.

Following on from our Wallace and Gromit post the other day where we mentioned that most of the other Google sites around the world had Sesame Street themed logos whilst Google UK had Wallace and Gromit, Google UK (and Google France, Spain, Australia, Arabic, Canada, Belgium, Finland, Hong Kong, Hrvatska, Indonesia, India, Israel, Japan, Korea and many more) has a Sesame Street logo today. Again it’s celebrating 40 years of Sesame Street but I can’t help wondering if Google got their dates wrong as according to the official Sesame Street site the show was first broadcast on November 10th 1969, so Google is 4 – 6 days off.

*Update* Missed this yesterday but Google UK had Cookie Monster on the home page so it looks like Google are doing some sort of countdown to the 40th Anniversary.

And of course don’t forget that since 2001 Google has been available in Swedish Chef as well as Elmer Fudd, Klingon, Pirate and Hacker.

Today’s Google Doodle celebrates the landmark occassion of man and dog walking on the Moon in the search of cheese. Yes it’s 20 years since Wallace & Gromit’s Grand Day Out. The doodle is only showing on Google.co.uk.
*Update*
Search Engine Roundtable has a nice round up of today’s Google Doodles from around the world as it is also Sesame Street’s 40th Anniversary today.