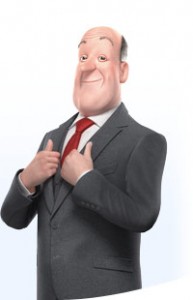 Jeeves is to make a UK only return to Ask.com this week according toThe Guardian and other sources. Three years after being put into retirement, PG Wodehouse’s famous butler character Jeeves is returning to help UK users with their searches and to help Ask take on the might of Google.

A national TV, press, radio and online campaign will kicks off this week to revive the butler after research showed that 83% of UK consumers still referred to Ask.com as Ask Jeeves, a name it ditched over 3 years ago in a re-branding exercise. Jeeves has been made over by Saville Row tailors Gieves & Hawkes while the ad campaign has been masterminded by Hanft, Raboy and Partners. The campaign includes adverts tailored for popular shows such as Hell’s Kitchen which features Jeeves and asks “why do onions make you cry?”

Jeeves will also gain a Twitter and Facebook profiles showing pictures from his 3 year hiatus. The TV ads start tomorrow but Jeeves is online now and waiting for your questions, such as “Why am I back?.